The Record Company (The Grammy Museum)

“Anything good that’s happened to us this year…it was built from the kindness of people…who gave time and energy to this group for no other reason than they loved it. That happened in Los Angeles.” Countering the City of Angels’ reputation for being cold and soulless, The Record Company frontman and guitarist, Chris Vos, opened an emotional and grateful vein when it came to expressing how good LA has been to drummer Marc Cazola and bassist Alex Stiff and himself since The Record Company’s inception in Stiff’s Los Feliz living room in 2011. It’s been a good couple of years for the band: They toured with heroes and legends such as BB King and Buddy Guy, signed with Concord Music Group, released their debut album, Give It Back To You, and have been selling out shows across the U.S. We consider ourselves fortunate to claim the stellar blues rock trio as LA locals and were glad to be in the room to witness another career benchmark: They represent that sweet spot where old school sounds and a new, reverent generation meet to carry on the torch. GRAMMY Foundation Vice President Scott Goldman’s interview with the band was thoughtful and typically illuminating (he’s damned good at what he does), touching upon subjects that ran from the band’s history to the Grateful Dead. And when the performance part of the program kicked in, The Record Company gave the room their all in typical TRC fashion. 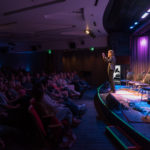